It’s the Thought that Counts: Letting Go of Mental Clutter

With much resolve, I lugged the encyclopedias down the stairs. After years of collecting dust on the living room bookshelves, I had moved them to our office… also known as… let’s-throw-everything-in here-we don’t-want-to-make-tough-decisions-about-room.  The encyclopedias had been a costly investment, but basically, they were beautifully unused. That’s an eloquent way of saying… they were CLUTTER.

Part of the reason it has taken me so long to deal with these outdated reference books, is there are SO many of them! Over 30 volumes!  30+ HEAVY volumes. It’s not like I could decide to be done with them and they were gone. This required an intentional decision, followed by work. I moved them from the office, down the stairs, and many trips later… had a pile in the hallway. Next, loaded the car (again… MANY trips) and drove to Goodwill and, you guessed it, many trips later… unloaded them. It was not easy, very awkward, but… it was a weight off my shoulders. Literally. 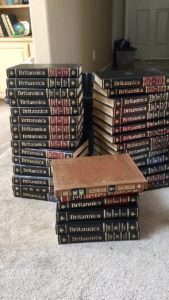 Dealing with clutter brings a release, a feeling of being freed up for a better life. As I’m dealing with clutter, it is freeing me to deal with what I’ve been hanging onto in all areas of my life. It’s the strangest connection! I am learning to let go of anything not useful. This applies to mental clutter, too.

What is taking up space in my thoughts, holding me back?

What am I lugging around, storing mentally, that serves no benefit?

What is taking my mental energy, holding me back from my dreams?

Well.  A lot of things! But… God chose this week to deal with…

And the interesting part is, it’s been the little, buggy things that have piled up (kind of like 30 volumes of old encyclopedias!) that I haven’t realized were weighing me down. As I began working on this post, I KNEW I was supposed to apologize to someone for a lousy attitude I had displayed a couple years ago. (Shocking. I know.) In God’s extreme graciousness to me, after I made the decision to do this, he led the other person to contact me first and apologize. Very much out of the blue! And… it’s amazing what can happen when we approach others in humility. It was such an easy conversation and such a FREEING conversation. No more wondering, “Are we okay with each other?”

So. What encyclopedia type clutter have you been storing? What could you choose to deal with this week, refusing to hang on to something that is not useful? As you pack up and carry out those items (many trips later…) picture yourself releasing a big worry or hurt, something cluttering your mind, holding you back. If it’s not useful to you, why store it?

Free up space for God to do a new work.

I came across this quote this week.  Maybe it will encourage you:

The first to apologize is the bravest.

The first to forgive is the strongest.

And the first to forget is the happiest. (Sam Chand)

I mean… it’s something to think about.