Life Updates and Other News

“Okay kids. Don’t buckle up. If the road drops out from under us we want to be able to get out of the car as quickly as possible.”

Yes. I actually said that— many times this past week. Ed has repositioned the orange cones and I’m again coming over the knoll looking for them in hopes our road is still there. 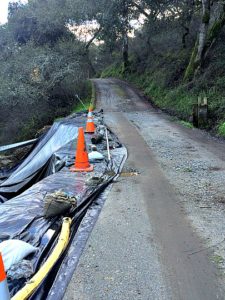 It is an 8 foot sheer, vertical drop down to a pile of oozing mud sloping into a deep canyon. This part of the road WAS 30 feet from the edge before the initial drop on Monday. Over the weekend, Ed also found 7 massive redwood trees that have fallen in the canyon. Crazy!

As precarious as all this sounds, the sunshine has definitely brought a more optimistic outlook, and we have several ideas for repairing it once the mud is    completely dry. But… just to be on the safe side… we are still parking most of our vehicles on the other side of the slide and using my van as a shuttle. The idea is to have as many cars on the outside should the road give way.

This plan is definitely not without glitches! Cory was running late for church so he missed the shuttle to his truck and had to hike out. Problem was… he forgot his keys on the first hike! He eventually made it… and burned a few extra calories too!

Speaking of Cory… he recently surprised us by going out for the men’s volleyball team.  Several weeks ago, he announced after dinner he was heading back to school for open gym. He randomly said he was considering trying out for volleyball and they were having an open practice for anyone interested. As he walked back in the door several hours later, he said(quoting the coach in a playful voice), “Apparently I’m a natural at volleyball.” Who knew?

The next day he came home from practice saying, “Apparently, I’m a really good server.” He was again quoting the coach and we have had so much fun prefacing every volleyball conversation with “apparently!”

At one point the coach pulled him aside to ask about his volleyball background. Cory explained his sister was on the middle school volleyball team and he would hit the ball around with her. As the coach probed further, Cory revealed that his sister is now 20 and he hasn’t touched a volleyball in 8 years!

Apparently it runs in the family. Hah! 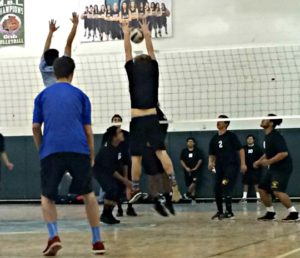 (That’s Cory in all black jumping to block the ball. Apparently, he’s a really good jumper too.).

Today I played piano on the worship team at church. The music was gorgeous…if I do say so myself. We did a very acoustic set (that’s cool band talk for less electric instruments…or something like that) and the presence of God was tangible in all three services. But…I HAD to take a picture of the door to the music room. 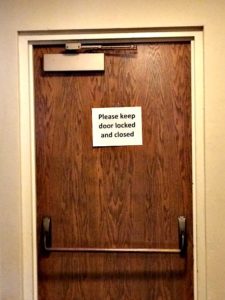 That sign is new and I’m just wondering if it came as a result of Ed and Cory snooping around back there trying to find my purse with Jessica’s keys in it a few weeks ago. Hah! I could not stop laughing to myself when I saw it.

Well, those are some of the highlights from this past week.

We continue to wholeheartedly rely on God for His direction and timing in our lives.  This verse is ministering to me so much right now….

Joshua 1:9. “Be strong and courageous. Do not be terrified; do not be discouraged, for the Lord your God will be with you wherever you go.”

Apparently, I need the reminder.