So… I told myself I was not going to write too much about Eddie in my next few posts because the first thing he said after I read the last one to him was, “You didn’t mention me as much as you usually do.”

Are you kidding me? He had a whole paragraph dedicated to how amazingly helpful he is and never complains and now he’s complaining about not getting enough blog time?

Anyway, I just HAVE to make an exception and brag on him one more time and then he’s side-lined for a bit!

Here’s how the day unfolded:

Jessica had a flight scheduled to leave San Jose this evening, and I had agreed to pick her up from work and drive her to the airport. Problem was, it RAINED all night and all morning and flash flood warnings started coming in.

I texted my friend, Brook, who works in San Jose and asked her if she knew if Highway 17 was still open. (It’s always the first road to close in stormy weather, but is the fastest route to the airport.)

Her response: “Drive in the fast lane to avoid landslides. Hah!”

Followed by, “The cars that have been hit by the big slides are usually fine. Worst case scenario—it pushes you into the divider. Take the van!”

An hour later, Brook sent me this picture: 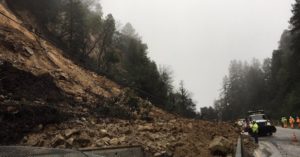 That’s a mudslide on highway 17!

Within minutes, the news came in that all major roads out of Santa Cruz County were closed.

The next hour was a frantic group text of Eddie, Jessica and me trying to figure out how to get to the airport.

Let me clarify that…

…basically I was frantic and Ed and Jess were calmly discussing how to work this out.

Ed agreed to pull off work early and do his best to get her there on time. He had to clean up the construction site in record time, and as he bent over to grab a tool— his pants split open across his back pocket. Haha.

I came up with a super-sensible-no-risk-long-way-around plan, but Ed made the decision to chance it on one of his favorite, backcountry, mountain roads. I really tried to talk him out of it, but he responded with, “I’m bringing my chainsaw in case any trees are blocking the way.”

He was dead serious. 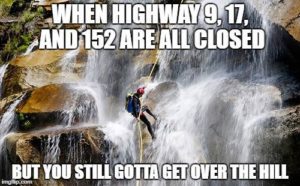 The road was extremely narrow with lots of blind turns. When they met another insane person taking it, they would have to inch by, hoping not to scrape against them. Water was cascading down the steep banks as if they were driving alongside a waterfall. Ed said the trees looked like matchsticks scattered all over.

When I asked him what Jessica was saying during all this he answered, “Dad. Slow down.”

He immediately regretted telling me that as he realized I was taking notes for my blog.

They made it to the airport with plenty of time to spare.

On the way home, Eddie ACTUALLY did have to use his chainsaw to cut branches off a tree that had fallen. Can you believe it?!

He also joked how his good friend who likes to take that same backroad to work had said not to tell anyone about it being open—keep the crowds away.

(At this point I quietly deleted my Facebook comment about Ed and Jess making it over Old Mt. Madonna Road that afternoon.)

Eddie is my hero. In so many ways.

I hesitate to mention… he even picked up Taco Bell on his way home because I was too stressed to cook, and ,of course, really did not want to go out in the rain. I mean, I don’t even know how to work a chainsaw out on the roads! 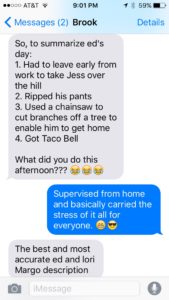 I’ve ended a post before with a screenshot of my texts with Brook. I thought you might enjoy her humor and insight one more time…