Friday could not get here fast enough. It had been a long week! Besides doctor appointments, I had met with some friends the night before to try and diagnose my laptop and phone issues. After spending hours on it, the consensus was to make an appointment at the Apple Genius Bar, and the sooner the better!

Ugh! Such a bummer!

So, Friday morning just seemed like a perfect time to soak my troubles in a bubble bath. I rarely get to do that, but my stress level was high and the tub was calling my name. Ed had left for work and Cory was finally out the door for school after coming back twice for forgotten items. The girls were asleep so, to me, the timing was perfect.

I had JUST put some fancy conditioner on my hair when there was pounding on the bathroom door. “Mom. MOM. I crashed my truck!”

I was out and dressed in seconds—conditioner still in my hair— to find Cory on the phone with Ed.

He had gone off the road, into a ditch and hit a tree on our property. 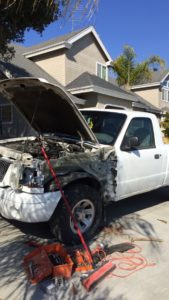 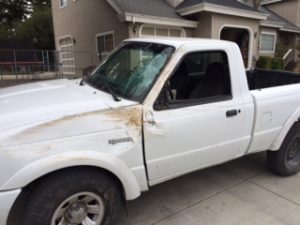 I was thankful he wasn’t hurt and no other vehicles were involved, although his truck was basically not drive-able. He had saved up his money to buy the little Ford Ranger and that truck had brought him so much joy.  But… no time to think about that now. He needed to get to school ASAP because his two hardest classes are first.

We hopped in the mini-van, conditioner still in my wet hair, and off we went. We live at the end of a mile long dirt road, and take country roads to get to Cory’s school. It’s a fairly quick drive with no cell reception. We were almost to the school when Cory noticed a car coming towards us that looked just like Jessica’s gray Tahoe.

“Is Jessica coming back from working out or something?” Cory asked.

“No, Cory. Her car is in the shop and she’s home sleeping.”

It really did look like her car and as we passed it, I looked in my rear view mirror and then said, “Hmmmm. That’s really strange. That Tahoe has the exact same sticker on the back window as Jess.” Cory and I had a moment of how-weird-is-that, but kept driving to school.

I dropped him off, and after writing a quick note explaining Cory was late due to “car trouble,” I was heading back home.  As soon as I got to the beginning of our mile long dirt road and had cell again, I noticed a text from Ed saying, “Call me ASAP.”

Ed answered his phone immediately (THAT alone is a miracle) and calmly blurted out, “Jessica’s car was stolen.” Ed was using his I’m-completely-being-serious-voice and I suddenly began to panic as I made the connection.

“Ed. I JUST passed her car and it was heading to our house. AND… our ‘clickers’ for the gate and garage are both in the car with our address on the registration.”

I FLEW down our road, wondering what I would find at home.

The girls were safe and no-one was around.  I called Eddie back to find out what he knew about the theft.

That morning our friend, Bob, who runs the shop, had arrived early to start filling out the work orders for each vehicle.  He had noticed a guy across the lane at GM dressed as a mechanic, whom he had never seen before.  Not thinking much about it, Bob placed keys in the cars needing service and hung the orders up in the shop.  An hour later, the Chevy mechanic went out to get Jessica’s car and drive it in.

He couldn’t find it.

The mechanic and Bob searched the whole lot and the Tahoe was nowhere. Reviewing the surveillance video showed the GM imposter mechanic simply getting in Jessica’s car and driving off the lot. He stopped for a moment at GM and picked up a hidden, white bag full of stuff and away he went.

Jessica’s car was stolen at the SAME TIME Cory had crashed.   And… Ed was literally trying to call me with news of it being stolen AS I was passing her car on the back, country roads with no cell.

I could not stop shaking and did not feel safe.  The rest of the day was a blur of dealing with insurance, calls to the police and renting a temporary car for Jess.

I had made a deal with myself to call my doctor on this day to find out results of the scan and ultrasound if she did not call me first.   There was NO WAY I was calling.  For whatever reason, bad things seem to happen in 3’s and I wasn’t risking the odds to possibly hear a bad report!

I would call on Monday!

Nine hours later the car was found.  The police recognized the sticker on the back window— you know, the one I SHOULD HAVE RECOGNIZED— and pulled the guy over ONE BLOCK away from the Chevy dealership where it was stolen!  The guy had been on quite a joy ride and the car was filled with cigarette ashes, beer cans, red bull cans, maps, registrations, umbrellas and trash.  He only had it for 9 hours, but it looked and smelled HORRIBLE.  Chevy kept the car for a few days and completely detailed it, however… they still charged us for the oil change— hah!

I noticed something very interesting as this day unfolded.  I seemed to be the ONLY one in my family who panicked.  While Cory had pounded on the bathroom door to get my attention after the crash, he was actually sweet and pleasant as we drove to school, as if everything was just fine.

Jessica was super calm as I broke the news to her about her car, although she scolded me for approaching her as if someone had died.

Both of them were completely confident in their dad’s ability to direct the situations.

Eddie handled ALL the necessary phone calls and paperwork and would tell the kids the next thing they needed to do.

Even when he pushed them a bit out of their comfort zones, like Jessica interacting with the rental car people, they would do it because Ed had gone before them making the arrangements.

Jessica and Cory know their dad loves them.

They know he wants the best for them.

They trust him implicitly!

I’m growing in my ability to trust my heavenly Father that same way.

I John 3:1 “How great is the love the Father has lavished on us, that we should be called children of God! And that is what we are!”

We made it through this “stranger than fiction” day and you’ll be glad to know that both clickers were still in Jessica’s car when we got it back, and, in case you were wondering…

I did finally get the conditioner rinsed out of my hair!